At the Table or on the Menu: Is Session Ever Really Over?

Most state legislatures across the country may have gaveled out for the year– but that doesn’t mean those Legislatures have stopped working. In fact, many states are actively meeting in preparation for next year’s sessions, and more frequently than the word “interim” might suggest.

However, unlike the more formal legislative sessions and legislative processes during the regular session, interim work can be very informal, frequently unpublished and often unnoticed.  It sometimes includes only those stakeholders and interest groups in close proximity to the capital who are tied into that information network.   As a result, trying to predict which issues lawmakers are likely to prioritize next year can be particularly challenging for any government relations professional not in the state capital, but it is critical to planning for next year. Because interim committee hearings can be invaluable for that information.  In addition, engaging with legislators during the interim and providing information during the hearings, can help shape the legislation that results from those hearings.

Most states adjourned prior to July 1 following enactment of their budgets. There are a few stragglers, such as Connecticut and Wisconsin, each with budget problems, and several that have recessed, such as North Carolina, Ohio, Rhode Island and Vermont.

The state legislatures that did adjourn prior to July have not sat idly by. Legislators have been looking towards 2018 and the issues discussed may be different than what you might expect.

Here are the top eight issues currently receiving the most legislative attention in interim committees and task forces across the country: 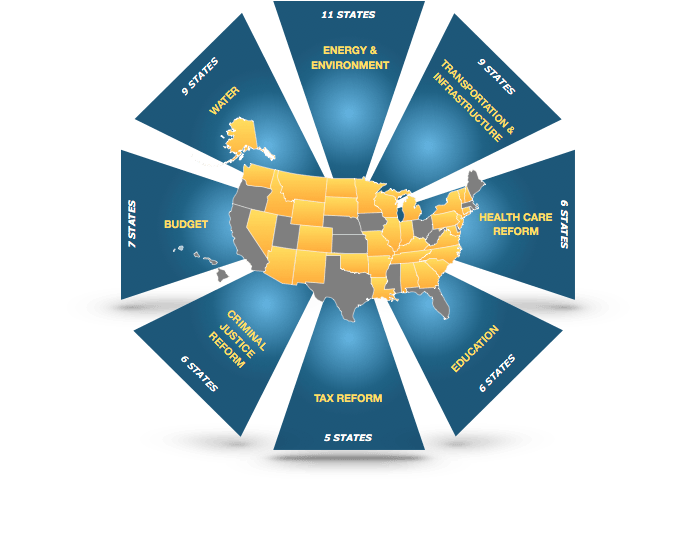 It is surprising that, despite all the news coverage and rhetoric around the opioid crisis, only a handful of state legislatures are meeting during the interim to discuss this issue. While many Governors, Attorneys General and mayors have been quite active in terms of speaking to the emerging crisis, most legislatures have not been as actively engaged during this interim.

Instead, some of the more prominent issues discussed during the interim are those relating to the environment and natural resources, specifically the transportation, conservation, and protection of water—a legislative trend that transcends regional lines.

Some state legislatures treat the interim like an extended vacation from their legislative responsibilities, while other states, like Utah, treat it as an opportunity to continue to engage in policy development. Anyone who has worked a session in Utah, Virginia or other states with short legislative sessions knows the breakneck pace of those sessions. Thus, the best time to engage and shape policy is before session begins – during the interim. 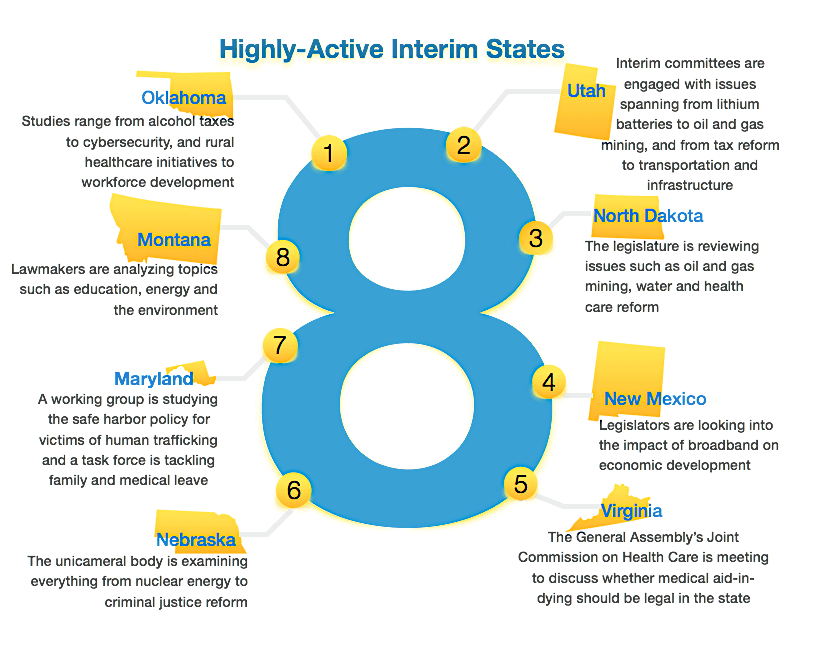 In states like Arkansas, Nebraska and Oklahoma, legislation that failed to gain enough support is “eligible for further study” during the interim. In most states, referring a measure to study can be considered the kiss of death. But in these three states there is a unique legislative process and special attention given to study measures. For example, in Arkansas, interim study proposals (ISPs) contain the full text of bills that failed during session. Sponsors request that the ISP be referred to an interim committee and the ISP operates procedurally similar to bills during session. Hearings are held and the committee will make a recommendation near the end of the interim whether or not to introduce the ISP as a bill. Oklahoma’s interim process behaves similarly.

The point of all this for government relations professionals is to identify opportunities for intervention, and of course, risk assessment. The longer a bill is discussed during the interim, with the kinks worked out beforehand, the greater chance it has gaining momentum during session. Take Georgia’s “surprise billing” issues that were discussed in the summer of 2016. During the 2015-2016 Legislative Session, the Senate Surprise Billing Practices Study Committee was formed pursuant to S.R. 974. The Committee was tasked with studying surprise billing issues and charged with recommending any necessary legislation. This culminated into S.B. 8, one of the most high-profile bills of Georgia’s past session. This bill passed the Senate and a House Committee before the session adjourned.  If advocates looking to amend or kill the bill had not been fully aware of the activities during the interim, it is very possible the bill could have been on a much faster track and gotten to the Governor.  Knowledge about the interim hearings informed those advocates about the strategy to follow during the regular session. Without that knowledge, they could have been racing to catch up and unable to negotiate as effectively.

Legislating is a year-round activity regardless of whether states are officially in session or not, so engaging in the interim is a must to avoid being left behind once the legislative sessions kick into high gear. And chances are, one of the issues being discussed during the interim as indicated on the chart below is on your list.

While some legislators have the option to stop thinking about legislation and focus on their full-time jobs, some or most of their colleagues are certainly trying to advance their agendas throughout the year.  State government relations professionals don’t have the luxury of thinking they can wait until bills are pre-filed and introduced.  The interim is where much work gets done, and if you aren’t monitoring the progress and potentially engaging during this time, you and your employer could be a first course on the menu of issues coming up next year. 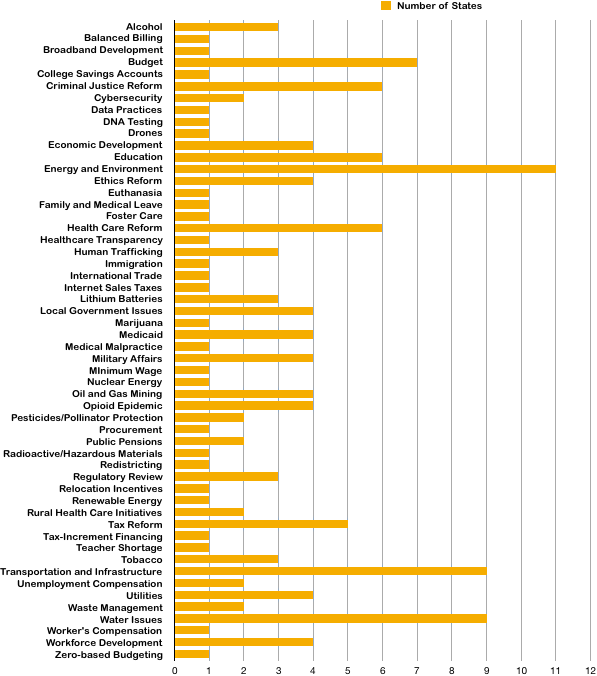