The State and Local Government Responses to COVID-19 Report includes State Legislation and Executive Orders related to paid leave proposals, mandated business closures, appropriations for state responses to the outbreak and Executive actions such as the creation of task forces and declarations of emergency. Selected agency, regulatory and rulemaking actions are also being included as they are announced or emerge. We are also identifying those legislatures that are suspending activities as a result of this crisis. Updates are continuously being made to this report. Click below for most recent version.

Since the global outbreak of coronavirus, over 80 bills have been introduced in 25 states, Puerto Rico, and the District of Columbia on paid sick leave and worker protections as well as appropriations requests. Over 340 executive actions have been issued in 50 states, Puerto Rico, the District of Columbia, Guam, and the Virgin Islands.  These executive actions include but are not limited to school closures, prohibition of mass gatherings, retail and business closures, and declarations of states of emergency. A total of 20 task forces have been established by 13 governors.  And, 25 states and the District of Columbia have issued emergency regulations on a number of issues including but not limited to insurance carriers, labor and wage, and medical licensure.  Fifty-six (56) legislative chambers have either temporarily adjourned, moved to virtual meetings, or announced an early recess or sine die.  Additionally, we have included actions coming from the administrations of the 100 most-populated cities and counties beginning on page 47. 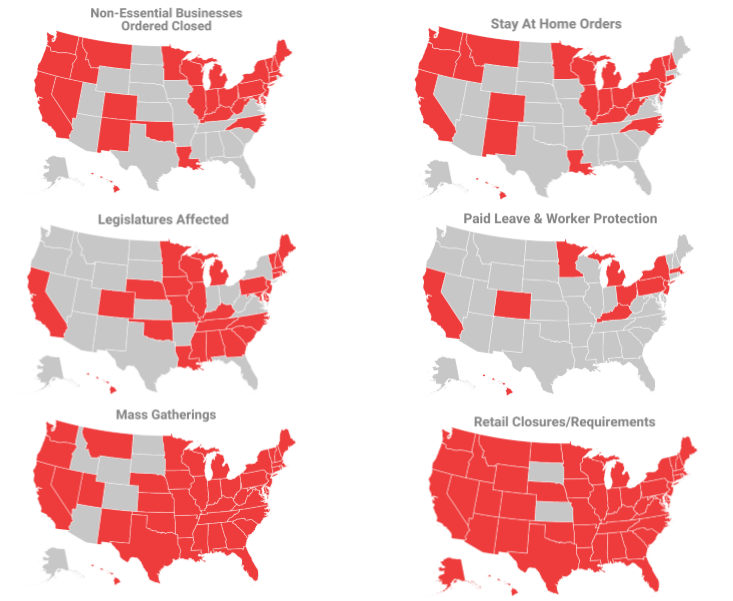 Get our daily COVID-19 Report in your inbox